They sold everything to work with MediYoga in the Land of Smiles. 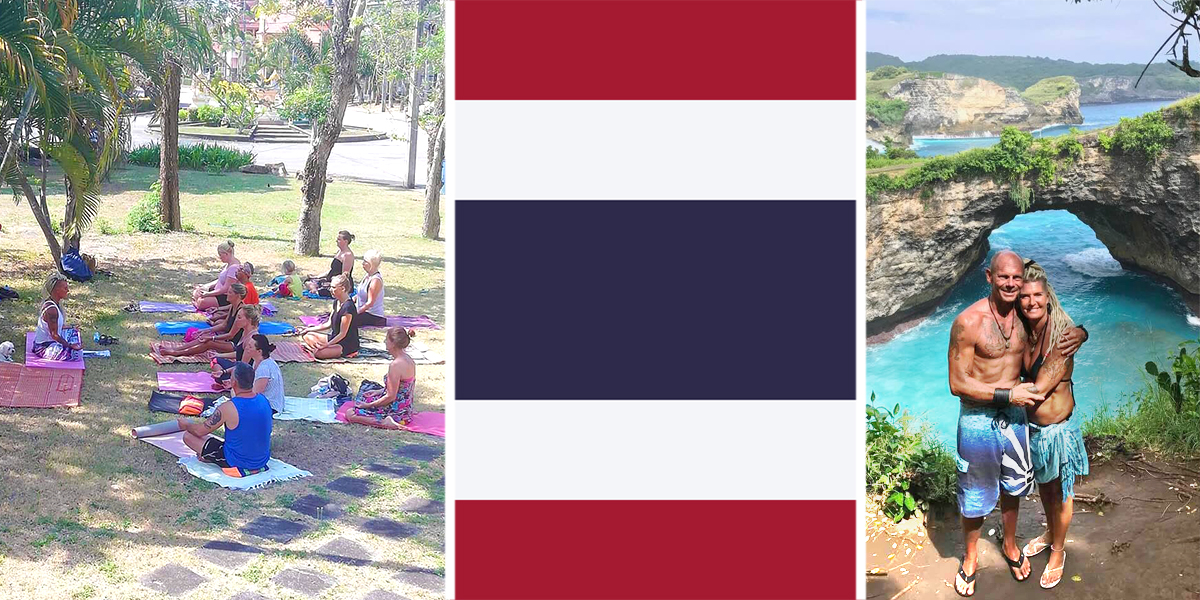 Husband and wife Per Torell and Ann-Loou sold all their possessions, packed their bags and moved to Thailand to work with MediYoga.

They call themselves the Crew of Love to emphasise that the yoga they offer comes from the heart. They first came to Thailand in 2015 with a sense of grief and trauma in the wake of a family tragedy and losing contact with a young daughter.

“I was in a state of deep grief but found the will to carry on in this fantastic country and naturally, I want to help others overcome such problems. When my daughter disappeared I went on sick leave from my job at the hospital and started doing MediYoga Starter Pack 3 twice a day to give me the will to survive,” Ann-Loou explains. “I felt that this is a place I want to bring other people to who are finding things difficult, which sowed the seed of coming back and working with yoga.”

In 2017, her dream became reality, although Per had to go back to Sweden to earn some money at the beginning.

They organised their first retreat that autumn with a handful of participants, but by February 2018, 14 dedicated Swedes had arrived to learn how to deal with stress and burnout in a peaceful setting with healthy food.

At the Pinary Park Beach Resort, the couple have held open MediYoga classes on the lawn every Wednesday where they welcome as many people as want to come.

“We’ve been pleased to see an increasing flow. Four came to the first session and by the last sessions, 15 people were coming.  Some of them were disappointed that they had not found out about us earlier but we are going to reach out in a better way ahead of the next season,”  Ann-Loou says. “We brought a few yoga mats, cushions and chairs with us, but most people bring their own. We ask for a voluntary donation for our open classes, and on average, people pay 200 Bhat each, around 60 kronor. All these donations go straight to the Eastern Swedish school in Ban Phe to buy various things for the schoolkids to use in break activities between study. The open classes vary from being in Swedish and/or English, depending on the make up of the class,” she adds.

“The classes have gained a very positive reception and it’s great to see so many men come, maybe my presence helps to blur the perception that yoga is just for women,” says Per. “Some people say that having been very sceptical at the start, they now come every week and tell us how good they think it is.”

This autumn they are going into partnership with their favourite café close to Suan Son Beach that has a large deck where they can do yoga. “The wooden deck provides shade with the help of a fine awning, which means the yoga will feel especially enjoyable with the river right next to it,” Ann-Loou explains.

They are also thinking about organising retreats on Bali and in Spain, but this is still at the planning stage as yet.

“When we came back to Thailand in 2017, we sold everything in principle, paid off all our loans and gave away things not worth selling. We now live a debt-free, simple life and go home to Sweden in the summer months to see friends and family. It is also an opportunity for us to work and save enough money to enable us to come back to Thailand again in November. We have a 57 square metre apartment in Helsingborg in Sweden, compared to the 134 square metre one we sold,” says Ann-Loou. “We rent out the apartment when we’re not there. Per and I both have motorcycles to get around and our daughter has a moped.”

They are spreading the MediYoga message because they feel it has helped them have a better life.

Ann-Loou explains: “I was in the grip of a deep, dark grief-stricken depression, after losing contact with two of my children on account of a psychotic man and I became obsessed with exercising. Yoga has helped me love myself again and I even had my breast implants removed to be free and like myself just the way I am. Liking yourself is happiness.”

Per explains: “In May 2017, via her knowledge about stress and burnout, Ann-Loou realised that I was exhausted. At first, I simply had to count my breaths for 5 minutes at a time, but I only really got going with yoga exercises when we came to the peace and tranquillity of Thailand. And then, I could see that my relationship with alcohol was not healthy. I realised I was abusing alcohol. Six months of yoga and AA meetings have helped me become a dry alcoholic today. We both stopped drinking alcohol on New Year’s Eve 2018/19. MediYoga and AA are an unbeatable combination.”

“Yoga has had a big impact on our family and when Per also did the training course, we were able to live our dream of working with MediYoga together,” says Ann-Loou with warmth as Per smiles at his wife and squeezes her hand. “We want to share our knowledge and give hope to people who need to find their own light at the end of the tunnel as we have done,” he adds.

“We’ve never been happier and more in love with each other and with all the people we meet.”

In Sweden, Ann Loou Torell works as an assistant nurse and massage therapist. She has four children, aged 13, 16, 18 and 20.

Per Torell works as a joiner when they are home in Helsingborg and has two children, 24 and 27, plus four grandchildren and another on the way.